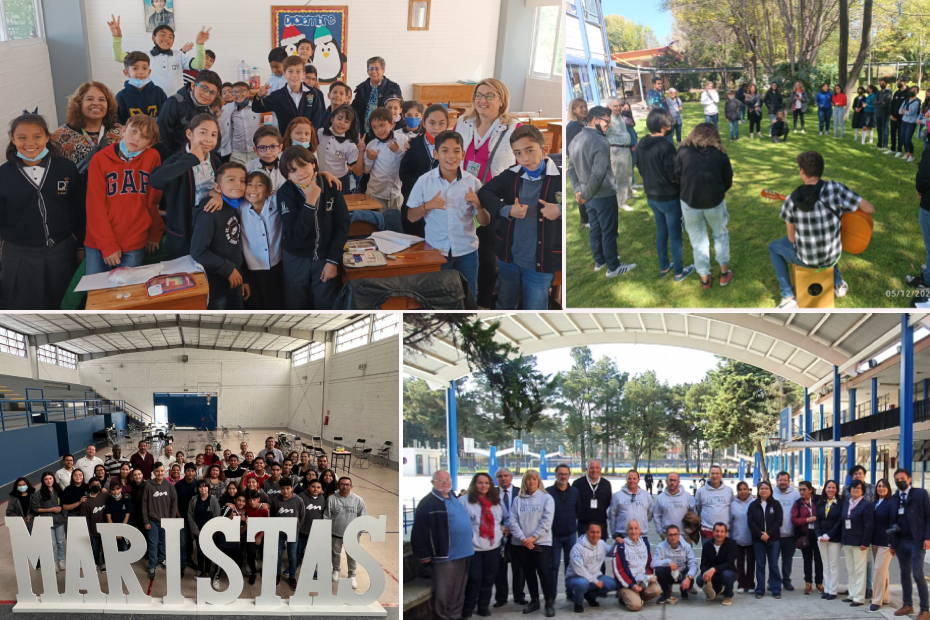 Photos of the visit…

The essence of Champagnat Global lies in the school, that is why the reflection can never be separated from the daily life of the school and that is the reason why the gathering in Mexico had a second very significant moment dedicated to the visit of some of the school works of the two Marist Provinces.

For logistical reasons, the participants of the gathering were divided into three groups who had a wonderful experience of getting closer to the school, as we will briefly describe below:

Experience of visiting the Marist works of Querétaro, Celaya and Irapuato (Marist Province of Central Mexico)

The group had the opportunity to visit the Marist Institute of Querétaro. They were welcomed by the management and students of the different stages of the school, sharing a moment of depth around the question of how to dream the world and how to realise this dream as Marists.

The group was also received by the authorities and students of the Marist University of Querétaro and were able to visit the facilities to know how the University works.

On the second day, the visitors went to the Marist school of Celaya, where they were able to enjoy an enriching sharing with some of the students of the centre and then to the school of Irapuato where they visited the most representative areas of the school. In the interiority room, they presented the different children’s and youth movements that the school has.

A second group had the opportunity to visit the Mexico Institute in Toluca on 5th December. Welcomed by educators and students, they discussed what we would say and ask of Marcellin today, all agreeing in the certainty that Marcellin would be happy to see how his project has built a global and extended family. The visit continued by learning about an innovation programme of the school using the incorporation of a technological platform KNOTION, which allows each student, either individually or through collaborative work teams, to develop a personalised and diverse learning path, based on challenges to be completed.

On Tuesday 6th, the visit focused on the Miravalles School, a school that lives its insertion in a marginalised neighbourhood, where the work of the community is the key to the organisation and improvement of its quality of life. The group witnessed a school that is inclusive in many ways, especially open to students with disabilities, who have found in Miravalles a family space that welcomes and cares for them.

Finally, the tour ended at the Instituto Mexico Secundaria in the heart of Mexico City, where they met with teachers and students, sharing their experiences of learning and teaching in times of pandemic, and what unites them in the Marist Mission. After lunch, they continued to share games and recreational activities that helped the visiting team to know more about the school, and also to know each other in those common themes that make us a great Marist global family.

Those who visited some of the works of the Province of Mexico occidental started their tour in a school located in a small town near Guadalajara called Cocula. In addition to the welcome and friendship of all the students, the visiting group was impressed by the Montagne programme where the school tries to incorporate and accompany children without possibilities, helping them in their professional, human and spiritual growth.

The visitors continued with a visit to the Cervantes Costa Rica school in Guadalajara, a Marist educational space of excellence where the students demonstrated through their leadership and protagonism that the integral formation they receive prepares them to face their future with the right tools.

On the second day, the group was received at the facilities of the Colegio Cervantes and the Marist University located in Loma Bonita (Guadalajara), where it was also very interesting to learn how the Marist philosophy is responding to higher education.

Finally, the group was divided into two parts in order to get to know two very impressive works that respond to very vulnerable realities:

On the one hand, it was very pleasing to share with the students of the Champagnat School located in a very needy colony on the outskirts of the city of Guadalajara. It is striking to know how the students and their mothers are empowered to be the subjects of their own history.

To add to the experience, those who visited the Marist Children and Youth Centre located in Villas de Guadalupe, in a marginalised area of Guadalajara, learned about the harsh reality of children who find themselves in a situation of poverty and marginalisation that does not allow them to attend public schools and thanks to the Marist centre they can be cared for.

Inclusion, excellence, innovation, family spirit, protagonism of young people, empowerment of women… are some of the words that sum up a wonderful experience of encounter with our school reality.