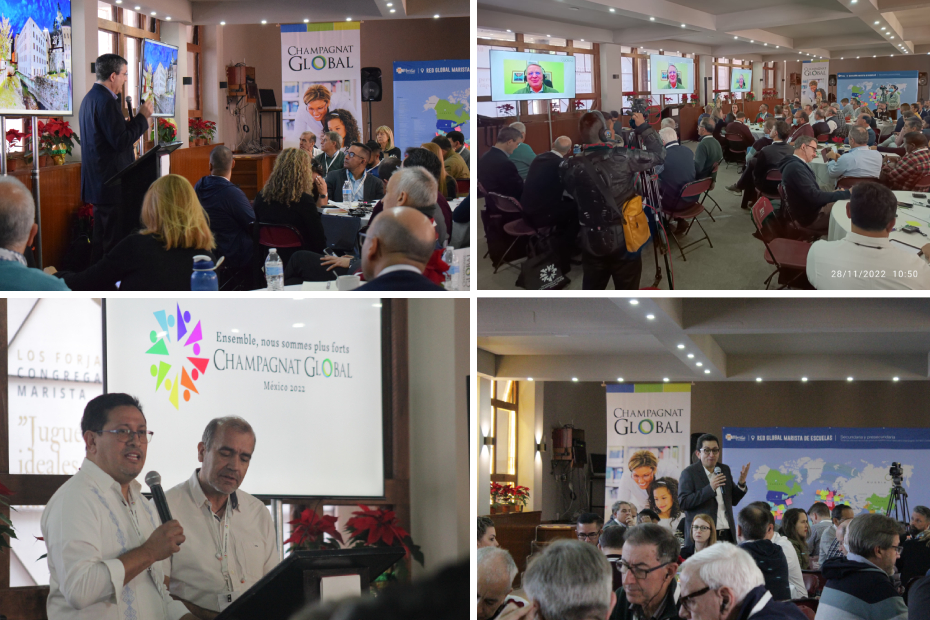 Within the framework of the International Meeting of the Marist Global Network of Schools, organised by the Secretariat of Mission and Evangelisation whose director is Br. Carlos Alberto Rojas and deputy director is Br. Mark Omede, the inauguration of activities took place on Monday. The opening message was given by Brothers Ernesto Sánchez, Superior General, and Luis Carlos Gutiérrez, Vicar General. This was followed by a series of activities that showed the integration and the sense of Marist life of all the participants. The meeting is held in Mexico City from November 28 to December 6, 2022.

“This Institute is not our work, it is the work of Mary. My invitation is that these days we seek to unite ourselves, bringing to life the motto stronger together. We may have differences, but together we seek proposals, we are the intermediaries between the creative response and the synergy that seeks to give life to this charism, for all this was the dream of Champagnat…” shared Brother Ernesto.

Let us be relevant today by commitment

In the words of Brother Luis Carlos, Vicar General, “the beginning of this day presents us with a very full and happy heart in which we can enjoy the presence of the diverse Marist faces around the world, an aspect that invites us to a sense of collaboration, tradition and innovation, called to know and make Jesus known in the style of Mary.

Champagnat Global recently celebrated a year of efforts, a historic moment, which adds one more achievement with this meeting, which brings together in person the reality present in 79 countries, as well as an image of diversity and richness present in each of our realities, which invites us to share, co-create and discover.

Champagnat Global is a proposal, a movement, which seeks to be creative and proactive. Let us be relevant today by innovation, but above all by commitment. Let us connect to be more meaningful.

In the end, spaces like this can influence local realities, since it is through networks that true citizenship is built, we are responsible for each other, and with this we add to the growth of society, according to the diverse realities and contexts.”