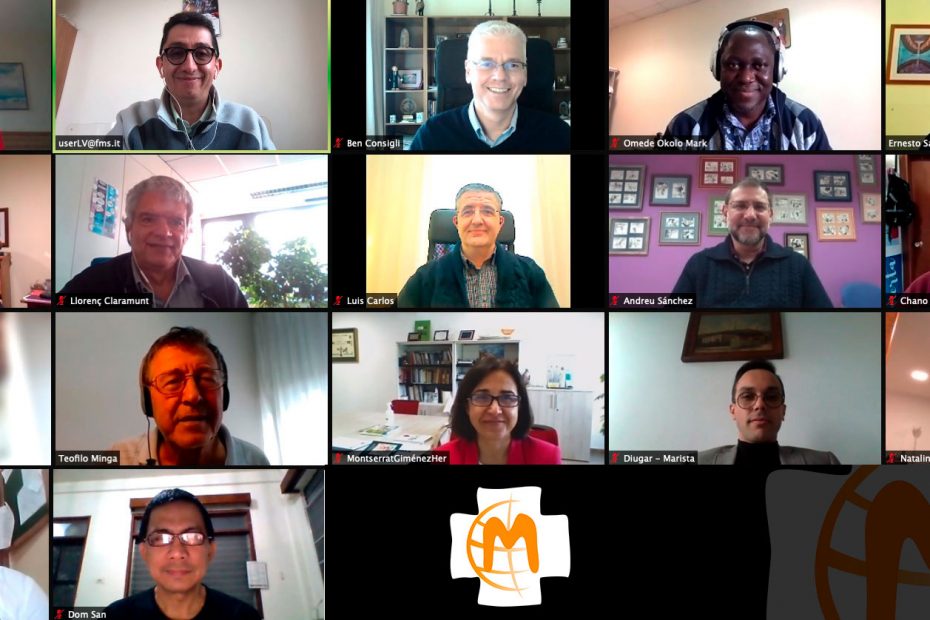 April 29th brought together the members of the Ad Hoc team for the Marist Global Network of Schools. The team, which started its assignment in 2019, met to finalise the work they have done together and to conclude their term of office.

The Superior General, Brother Ernesto Sanchez, addressed the members of the team thanking each of them for the sacrifices and efforts made to reach the launching stage of the network.

In the address, he thanked all the members of the team for their availability to be part of the international commission, grateful for the time they have dedicated to the work (in the midst of many other ordinary activities), and their valuable contribution.

He went on to say that “for several years, the idea of networking our schools spread over the five Continents has been developing” and that the XXII General Chapter invited us “to build Marist mission networks at the level of the Provinces and Districts, the Regions and the General Administration, which promote innovation and renewal in our education and evangelization efforts.”

Br Ernesto reminded the team that “as a commission, they were invited to develop a pilot proposal for the Marist School Network and their contribution has helped to generate a set of ideas related to this objective and what is expected of this NETWORK, the added value that our schools can have by being part of said NETWORK, and ideas for the launch, which will happen very soon”.

He was optimistic that this NETWORK will be another concrete sign of our journey as a Global Marist Family, in line with the General Chapter. He thinks that, although the service of this commission is now ending, each of the members will continue to be involved in one way or another in supporting the creation and development of this project in their own Provinces, Districts and Regions.

The gathering, which took place online using the zoom video conference, was an opportunity for the members to recap the journey so far and also to give ideas and suggestions towards the implementation of all that has been done.

The Director of the Secretariat for Education and Evangelization, Brother Carlos Alberto Rojas presented a summary of the work since the inaugural meeting of the team in 2019 till now. The summary brought to light the initial consultation with the Institute through a survey, the division of the team into task groups with the inclusion of some invited guests. Other areas covered in the summary were the launching event of the network, the roadmap document, the digital platform planning, as well as thoughts on the network interactive projects.

Members were given the time to express themselves freely and, with the use of a Padlet tool, to make an interactive evaluation.

To conclude the meeting, the Vicar General, Brother Luis Carlos Gutiérrez, spoke some words of encouragement (see here: English | Español).  He serves as a link person of the General Council to the Secretariat for Education and Evangelization with Brother Ben Consigli.

Brother Luis Carlos invited all to reflect on three major areas from the time the team came together:

Finally, the members of the commission were invited to continue to be ambassadors of the Marist Global Network of Schools wherever they are on mission for the Institute.